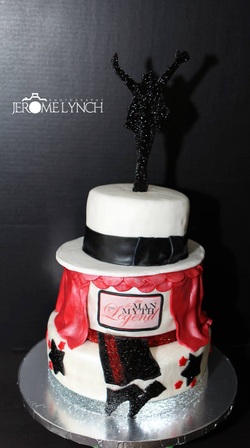 I get a call from one of my fellow Cake Diva stating that someone is looking for a Micheal Jackson cake. I call the person and she asked if we could meet. I go meet with her and she tells me she is a cousin of Michael Jackson and begins to interview me. Immediately following the "interview" I get a call from an ABC Executive (crazy seeing the Cali area code pop up on your phone) stating I've been selected to do Michael Jackson's 55th birthday cake and I need to get a story board together to present to Michael’s Mom, Katherine Jackson, and other ABC production executives TOMORROW!!!

The next thing I know Angel Cakes info is on The King Of POP tribute website, I'm presenting a cake to his mom and KID'S and my cake is on the 10:00 news.  And of this happened in SEVEN DAYS!!! A HUGE thank you to Jerry Lynch of Jerome Lynch Photography for capturing this moment and to Genises Jones and to NORTHWEST INDIANA CHAPTER OF WOMEN ENTREPRENEURS OF AMERICA.

It was truly an HONOR to meet and presented this cake to Kathryn Jackson, Paris, Prince Michael, Blanket & the rest of the family. The event was held at 2300 Jackson Street in Gary Indiana where THE KING OF POP was born which happens to be my home town.