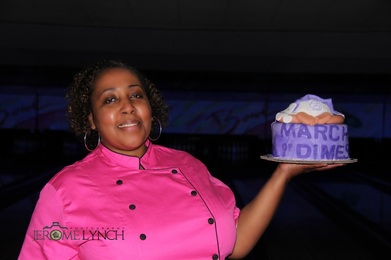 ﻿﻿﻿﻿﻿Because of severe childhood allergies, Angela spent many summers in the kitchen since the age of eight. Her grandmother thought enough to teach her to bake and it went from baking with her grandma to her very first easy bake oven to realizing she  not only had a propensity for baking to taking classes and knowing this was not only her passion it was a call. ﻿﻿﻿﻿﻿
﻿
There were many obstacles that came in her path, like loosing her job as a commercial banker while at the same time going through a divorce. While everything around Angela was changing or disappearing her passion for creating cake art only strengthened. At one point she had to make a decision on what the next phase of life would be. Then God did something awesome, He allowed her to hear the words "No one will ever by one of those cakes," and it sparked something in Angela that still lives in her today.

In 2009 Angela decided to perfect her craft and took decorating classes at Michaels Craft Store. There she earned four certificates and was offered the opportunity to intern at her instructor's cake company. It was after she created a cake that resembles the  Face Book and taking requests to create other sculpted cakes that Angel Cakes LLC was launched in 2010.

The year 2011 became a professional turning point. The popularity of the Angel Cakes brand grew quickly and the staff of Angel Cakes grew from one to four. She has been featured in several of the local newspapers and magazines and has had the honor of featuring her gourmet cupcakes on ABC's Windy City Live, where she met  Candace "Sprinkle Nelson of TV's famed show 'Cupcake Wars."

She was invited to participate in the Northwest Indiana Times 2012 Bridal Expo, competed and won second place in the Michael Jackson Convention Cake Contest. In 2013 she was crowned the Farmers Insurance Desert Wars Contest Winner. She was also one of their premiere vendors for Farmers "March Of Dimes Charity Event. In 2014 she was honored by The Northwest Indiana Chapter of Women Entrepreneurs of America as the recipient of their "Stargazer Award."  One of her greatest honors was being selected to create a custom cake to commemorate Michael Jackson's 55th Birthday. This cake she personally presented to his mother Katherine and his children during a celebration of his life in her own home town of Gary Indiana.

With the complexities of running a growing business, Angela believes her greatest accomplish is being a full time mom to a son who is a budding entrepreneur himself.