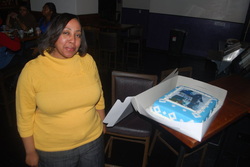 The year 2011 became a professional turning point. The popularity of the Angel Cakes brand grew quickly and the staff of Angel Cakes grew from one to four. She has been featured in several of the local newspapers and magazines and has had the honor of featuring her gourmet cupcakes on ABC's Windy City Live, where she met  Candace "Sprinkle Nelson of TV's famed show 'Cupcake Wars."


She was invited to participate in the Northwest Indiana Times 2012 Bridal Expo, competed and won second place in the Michael Jackson Convention Cake Contest. In 2013 she was crowned the Farmers Insurance Desert Wars Contest Winner. She was also one of their premiere vendors for Farmers "March Of Dimes Charity Event. In 2014 she was honored by The Northwest Indiana Chapter of Women Entrepreneurs of America as the recipient of their "Stargazer Award."  One of her greatest honors was being selected to create a custom cake to commemorate Michael Jackson's 55th Birthday. This cake she personally presented to his mother Katherine and his children during a celebration of his life in her own home town of Gary Indiana.
Phone: (219) 649-1765 Email: Angelcakesmail@gmail.com
Copyright © 2010-2015 Angel Cakes Boutique. All Rights Reserved.
Powered by